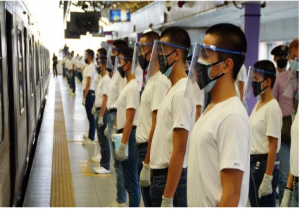 SANTOLAN, Pasig –The Light Rail Transit Authority together with the Philippine National Police staged a simulation exercise in LRT-2 on Tuesday, May 26 to better prepare for the smooth implementation of social distancing protocols once railway-based transport operations are given the green light to resume.The LRTA Safety and Security Division (SSD) implemented a strategic passenger distribution per platform. Proper queuing following the “Safe Distance” markings from the inspection area up to the concourse, AFCS gates, platform area, and inside the trains were all simulated.

Starting off at the inspection area in Recto station, at least 500 police trainees acting as passengers took a train bound to Cubao allowing embarkation and disembarkation. Upon reaching Cubao, passengers transferred to Platform 2 enroute back to Recto.

NCRPO Chief Major Gen. Debold Sinas, LRTA Spokesperson Atty. Hernando Cabrera, LRTA SSD Manager Jimmy Chua, other railway security officers and managers, and other LRTA and PNP officials graced the simulation held.Sinas extended his gratitude to the administration of LRT-2 for allowing it to be the model venue for the other rail transit systems.The LRTA Management also conveyed its gratitude.“Nagpapasalamat po kami sa tulong ng PNP, lagi niyo po kaming sinusuportahan. In behalf of LRTA Administrator Reynaldo Berroya and other LRTA officials and employees, maraming salamat po sa lahat ng personnel ng PNP (We extend our gratitude for the help given by PNP, you have always been supporting us. In behalf of LRTA Administrator Reynaldo Berroya and other LRTA officials and employees, thank you very much, all PNP personnel)” the LRTA Spokesperson addressed. Administrator Berroya believes that this exercise is of significance to both the national police team and the LRTA Management as it will intensify the coordination schemes between PNP and SSD, and among the LRTA Operations Management teams in preparation for the actual operations.Also, he said that this will allow LRTA to continue and beef up the implementation of stringent social distancing measures including reducing passenger capacity to curb the spread of the coronavirus disease within the LRT-2 premises while also ensuring that the security of its passengers will not be compromised.Safety Protocols and GuidelinesIt shall be recalled that according to the DOTr guidelines in view of the DOH and IATF safety recommendations, a maximum of 160 passengers will be allowed inside each LRT-2 trainset.Administrator Berroya is thus appealing to passengers to allot extra time for their journeys noting that passenger entry will be limited to effectively implement social distancing protocols.He added that some of the responsibility to help beat the COVID-19 while commuting using the LRT-2 System will fall on commuters who must exercise their self-discipline in adhering to all new guidelines, and to employers, who can modify work schedules to help prevent overcrowding among mass transportation modes.

Safety and health protocols in LRT-2 were posted at strategic locations inside the stations and through the LRTA digital media platforms to keep passengers informed.Once operations resume after the temporary suspension last March 17, 2020 with the enforcement of Luzon-wide enhanced community quarantine as affected by the pandemic, the LRT-2 System will operate following its previous schedule starting at 5 AM and closing at 8:30 PM in Cubao and at 9 PM in Recto.