The Light Rail Transit System Line No. 1 consists of the 15km elevated railway system servicing the Taft Avenue – Rizal Avenue route between Baclaran, Pasay City and the Bonifacio Monument in the City of Caloocan.  It is considered to be the first LRT system in Southeast Asia. 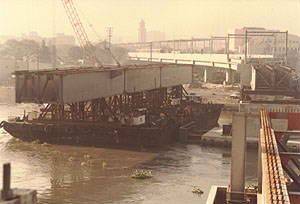 Actual construction in Manila started in September 1981 at Taft Avenue between EDSA and Libertad.  By the end of 1983, the construction had risen out of the streets over most of the route; and the shape of the new transit facility was taking shape for all to see.  The first Light Rail Vehicles (LRVs) arrived in Manila in November 1982 and construction of the Pasay Depot became the most vital task of the whole project.

Power was turned on in the Depot and became operational in December 1983.  The LRVs began trial runs on the Taft Line in March 1984 and by September 1984 the Taft Line gave the public a view of what was to come by providing free public passenger rides for a one week period.

After September, there was a strong coordinated effort to finish all the remaining Taft Line work and finally, on December 1, 1984, the Taft Line was officially opened to public service. 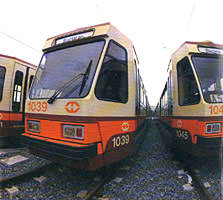 Work on the Pasig River Bridge started in November 1984 with the super-structure floated out and put into place.  By the end of January 1985, the bridge was completed and track laid across to join up with the track on the other side.

Previous to this, there had already been a major effort on the Rizal Line side, and with the Pasig River Bridge complete, speed trials began in February 1985.  By April 1985, passenger service was extended into Carriedo, the downtown station, and one month later, on May 12, 1985, the Rizal Line was put into service. 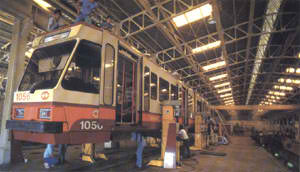 To operate the System, a contract was entered into between the LRTA and a specially created new company METRO  INC. – a wholly owned subsidiary of the Manila Electric Company.  METRO’s task would be to acquire the know-how of the new technology and develop an efficient, well–trained organization to operate the System and manage its day to day affairs and be responsible for all technical matters in the future.

The LRTA took over all System operations after the rank-and-file employees of METRO INC. staged a wildcat strike, destroyed some of LRTA’s properties and paralyzed the entire operation of LRT Line 1 system from July 25 to August 2 of 2000.  In view of the adverse consequences brought about by the said strike on the financial position of LRTA and on the efficient provision of LRT services to the public, the LRTA decided not to renew the 16-year Operating and Maintenance Agreement with METRO, Inc. which coincidentally expired on July 31, 2000.

Originally, Line 1 has a length of about 13.95 km and runs from Baclaran in Pasay City to Monumento in Caloocan City.  Pasay City lies in the south-west section of Metro Manila, close to the airport.  From there, the line runs in a north-western direction, parallel to the Bay but at some distance from it along Taft Avenue to the Manila City Hall, where the central terminal is located, then through Arroceros Street, across the Pasig River, entering the Santa Cruz district at Feati University.  From there, it follows Rizal Avenue and Rizal Avenue Extension in a northernly direction to Monumento in Caloocan City.

Under the LRT North Extension Project, a further 5.7 km elevated line has been constructed from Monumento Station of Line 1 to North Avenue of Line 3, with 3 additional stations namely: Balintawak, Roosevelt and a Common Station. The opening of Balintawak Station and Roosevelt Station on March 22, 2010 and October 22, 2010 respectively, has brought closer to the goal of “closing the loop”, connecting LRT Line 1 from Baclaran to Roosevelt to the Metro Rail Transit that runs along EDSA. With the nearing completion of the Common Station, seamless connection between the two lines will soon be realized.

The Megatren system was built at a cost of P31 billion in soft loans mainly from the Japan Bank for International Cooperation (JBIC). This is a very concessional loan, with 2 percent interest for three packages, and payable for 30 years with a 10-year grace period. 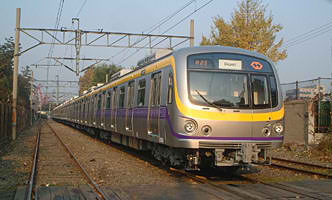 One train can seat 232 passengers. It can accommodate 1,396 more standing passengers along its spacious coaches. Compared with the previous light rail projects, LRT 2 was more difficult to build because of highly technical problems. Several international companies participated in the project, which consists of four (4) contract packages. Package 1 is the depot in Santolan, Pasig where the 18 trains are stabled, and where the employees? quarters, and offices are based. Package 2 consists of the substructures, mainly the railway?s foundations including the columns and pilings that support the guideways. Package 3 forms the superstructure composed of the girders, or beams that support the train rails, the viaduct, and the train stations. Package 4 includes the electro-mechanical systems, the rolling stocks, the track works, including the network of cables and poles that transmit power to the trains.

A special method called the pre-casting segmental method (PSM), was used in building the viaduct or the long stretch of suspension bridges resting on the concrete towers.  The method is of European technology and is widely used worldwide. In the Philippines, the Megatren Line 2 project pioneered the use of the PSM technology or the  pre-casting of the girders into smaller segments so that each span connected between two columns is weighing not more than 58 tons.

The Megatren is the latest of its kind in the world today. It is a fully automatic (i.e., driver-less) system which is at par in terms of facilities and technology with those in other parts of the world. It is equipped with a CCTV system that enables the railway operator  to monitor activities of passengers and employees at the stations and inside the trains. Moreover, the LRT 2 is commuter friendly and has facilities especially designed for the elderly and the differently-abled.  It has Braille tactiles along the lanes and elevators which enable blind passengers to be guided on their way to the trains. The coaches are also more spacious than those of the earlier systems. These enable passengers with disabilities and those onboard wheelchairs to be able to board and alight from Megatren without any problem. Elevators are installed in the stations also for the use of the elderly and disabled passengers.

Another key feature of the Megatren is its automatic vending machines which enable the passengers to buy their tickets without queuing at the ticket booths. This allows for faster mobility of people and added convenience to commuters.

Line 2 has a total length of about 13.8km and when fully operational, will run from Santolan, Pasig City to Recto in Manila.  As of date, however, Phase 1 of the line has started operating from its Santolan Station in Pasig, heading in a northwest direction towards Katipunan, and finally, in a southwesterly direction along Aurora Boulevard, to Cubao.

It extends from Santolan, Pasig City in the east to Recto, Manila in the west with 11 stations or terminals: Santolan; Katipunan, the first and only underground air-conditioned station; Anonas; Araneta Center-Cubao; Betty Go-Belmonte; J. Ruiz; Gilmore; V. Mapa; Pureza;  Legarda; and Recto.

Phase One covering the stations of Santolan, Katipunan, Anonas and Araneta Center-Cubao began its operations on 5 April 2003 while Phase Two from Betty Go-Belmote to Legarda was inaugurated on 5 April 2004.  Recto Station, the last station, is expected to be opened before the end of 2004.

Like its predecessors in LRT 1, all 18 trains of the Megatren are electrically-driven using a solid state propulsion technology powered by electric motors of 1,500 volts.  Operated automatically by the Automatic Train Operations system, it can travel up to 80 km per hour on top speed. Travel time between Santolan and Recto will only take 30 minutes.

Recently, President Gloria Macapagal-Arroyo re-christened the Megatren as the Purple Line, noting the bright violet and canary yellow blends on the lower edge of the coaches, running from the front and all the way to the rear end. The colors and design denote the uniqueness of Philippine ethnicity.

The computerized coaches measuring 3.2 meters wide and 92.6 meters long are much bigger and faster than their Czechoslovakian counterparts of MRT 3 cruising on Edsa, and the South Korean-manufactured Adtranz trains of LRT 1.

With this size, the Purple Line trains can accommodate up to 1,628 passengers; even if there were elderly and physically disabled on board who are provided with space for their own wheelchairs and mobility tools, alongside the fiberglass reinforced plastic benches.

Every four-car train has 20 sliding doors per side to facilitate the quick and convenient boarding and alighting of passengers. Each coach is also equipped with two units of mounted air conditioners.

Each train has its own Public Address System (PAS) from which a recorded computerized announcement of each station stop emanates. The PAS could transmit music for a relaxing journey.

Designed to be commuter-friendly especially for the mobility-impaired, all elevators in all terminals of the Purple Line are with an engraved Braille, while all station concourses and platform levels are installed with path finding tactiles to guide persons with disabilities, specifically the visually-impaired.

In keeping with the fast-paced computerization and modernization of the world, the Purple Line is the first in the country to use two novel innovations in the mass rail system. These are the ticket vending machines (TVM) and the highly-sensitized Operations Control Center (OCC).

The TVMs that either accepts coins or P10, P20, P50 bills, or both, dispense single journey tickets per person.  The OCC networks necessary internal and external linkages for an efficient, safe and secured service to commuters.

Aside from TV monitors, the OCC consists of ultra-modern communication gadgets and technology systems from Spain, Singapore, Germany, Japan, South Korea and France.  These allow the on-the-spot recording and confirmation of all goings-on in all the stations.  The Supervisory Control and Data Acquisition is responsible for the remote control management of the power supply to the depot and the entire 13.8 km stretch.  The Building Management System takes care of the Katipunan underground air-conditioned station.  The Centralized Paging Information System is the public address system that connects the management to their frontliners and passengers.  The schematic diagram aids the OCC engineers know the problem track areas of the computerized trains which have their own black boxes similar to those of aircraft carriers.

With the goal of the national government through the Light Rail Transport Authority to provide the public with an alternative means of transportation, it is believed that Megatren or the Purple Line results in less traffic congestion on the roads, reduction in air pollution, a cleaner environment, considerable savings in travelling time, great economic benefits and a higher quality of life for commuters.  The ease and convenience for large numbers of people to access the stations produce commercial, retail, and office development opportunities that contribute to faster urban renewal.